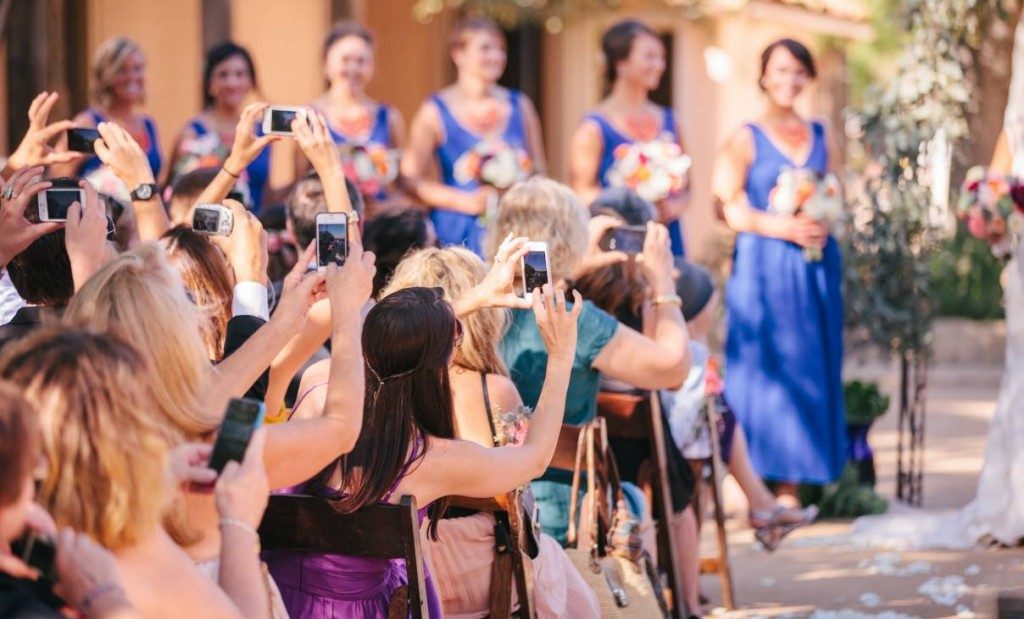 Corey Ann is an award-winning photographer based in Northeast Ohio, and serving destinations in Ohio and worldwide. This post originally appeared on her blog.

Recently, the idea of “guest photographers” came up in one of the photography groups I am part of online, and someone asked what the big deal is. Why wouldn’t we want more people capturing images for our clients? I thought this was a great question! I don’t have a single problem with guests taking images and sharing them with the couple later. It makes me happy to know there will be other photos of moments I may have missed, or alternate angles that I couldn’t cover. I also completely understand that some have a love for capturing images and enjoy taking pictures at weddings when they are guests. However, my heart breaks when a guest ruins an otherwise lovely image or jumps in front of me when I’m capturing a key moment from the day.

It completely slays me when this happens. While I am not remotely egotistical at all, I am fairly confident that my image would have been better than the one they captured. In my past seven years as professional wedding photographer, it’s been sad to watch the progression from seeing smiling, encouraging faces as the bride is escorted up the aisle to faces hidden behind the cameras and cell phones that line the aisle. These are all reasons why I am elated when I hear of couples opting for an unplugged wedding—or, at the very least, an unplugged ceremony.

One thing there is absolutely NOTHING I can do to combat is a flash from a guest photographer’s camera. There is rarely anything that will save the image and no repositioning will change the outcome. The above photos are just two of the hundreds of images of the wedding processional that I’ve had ruined from a camera flash. (I rarely, if ever, use flash for the ceremony, so the light you see here is ALL from the one camera’s flash.)

This girl’s father literally shoved me aside and gave me grief because I was blocking his daughter from standing in the aisle to get a picture. This sanctuary only had one aisle and very little room to move thanks to the small space that was filled with guests. I took this image to protect myself later in case the clients were upset that I had to stand slightly off-center for a portion of their day. Also? That Nintendo DS made the LOUDEST noises when it took pictures. It was crazy.

Since this image was taken four years ago the DSs have been replaced with iPads, which are a million times worse when it comes to eyesores.

This kid’s dad yelled at my second shooter during a wedding and shoved his kid up in front to make sure he got an image with his iPhone during a destination wedding in Cozumel. Note: he wasn’t a guest of the wedding, just a guest of the resort.

This whole situation broke my heart. In many churches, photographers are HEAVILY restricted as to where they can work, and the Heinz Chapel is one of the strictest I’ve ever worked at. We are only allowed to be outside of the sanctuary in the door opening where the center aisle is, and in the balcony. We are not permitted to move during the service. Thankfully, my second shooter was in the balcony, but that didn’t make these guests go away. Luckily, he was able to get images of the service where you could actually see the bride and groom. I argued, begged, and pleaded for the church lady guarding me to at least allow me to go into the side aisle so I could get a clear shot of my clients when these guests jumped into the aisle but I was not allowed. Instead, I just had to take what I could get and cry a bit on the inside.

I also want to add this: if you are a guest at the wedding, please make sure to withhold posting pictures of the bride and groom online until AFTER the ceremony. I can’t tell you how many “first looks” have inadvertently happened online before the wedding because a bridesmaid or groomsman has uploaded pictures to social media before the wedding and a bride and/or groom who were killing time by browsing Facebook saw their future intended before the ceremony. Don’t do it!!!!! And make sure that it’s OK with the couple to share the images on social media later; sometimes people prefer to keep things quiet, and you don’t want to cause undue stress.